The best things to do in Manchester this summer 2022

Things are hotting up in Manchester this summer - and we're not just talking about the recent warmer weather.

Summer 2022 is set to make the city sizzle with events, from music and foodie festivals, to international sports tournaments, and plenty more inbetween.

So if the chaos at Europe's airports has got you rethinking your summer break, why not make it a staycation in Manchester with CitySuites? While you're not exploring the city, you can relax in our luxury spa pool and jacuzzi or enjoy a drink at our bar during Happy Hour? Look into your dates here!

Check out our list of what's happening in Manchester this summer!

Where: Across the city

On Sunday 19th June, Manchester Day will bring a huge amount of festivities held across the city's parks, including Piccadilly Gardens and Cathedral Gardens, where there'll be music performances, food and drink stalls, climbing walls, and circus performances. A spectacular parade will also make its way down Deansgate at 1pm, heading towards Exchange Square, before turning down Cross Street and John Dalton Street, then back down Deansgate.

Manchester Day is a family friendly event and free for everyone to attend! Find more details from the organisers here. 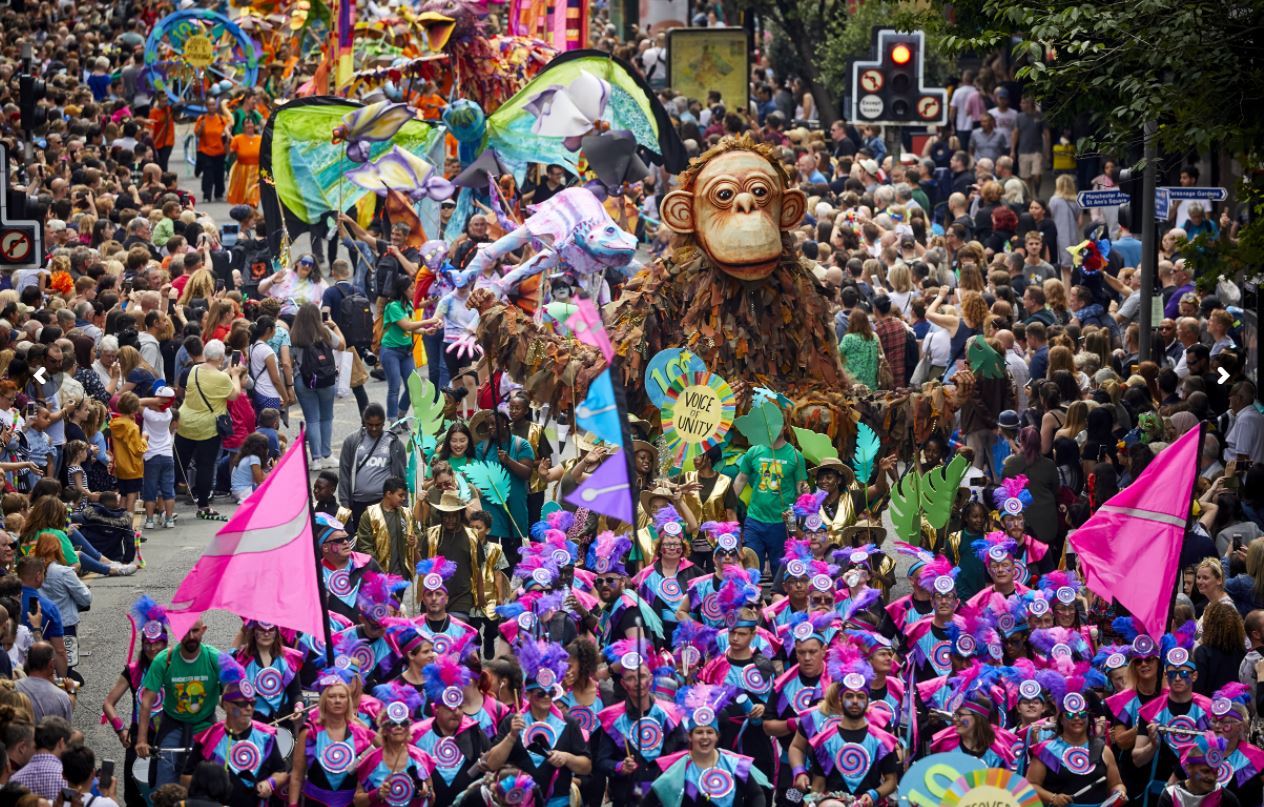 Sounds of the City – Castlefield Bowl

A staple part of the Manchester music scene, Sounds of the City is back in June 2022 featuring a range of acclaimed artists, with Lewis Capaldi, opening the event on Wednesday 28th June. Other artists performing include Foals, Crowded House, James, Pixies, Sam Fender and Hacienda Classical, who will close the event on Friday 8th July.

Castlefield Bowl itself is an outdoor ampitheatre style venue at the end of Deansgate, just a 20-minute walk from CitySuites. Fingers crossed the rain holds off! Tickets available here.

Organised by hundreds of churches, businesses and local charities, Festival Manchester brings a huge celebration to Wythenshawe Park across the first weekend of July. Entertainment includes a family fun zone, a high-tech gaming lobby, a mass children’s choir, and live music from a line-up of local artists, including Amongst Wolves, Goodboys, and Kingdom Choir. There will also be the biggest man-made beach Manchester has ever seen!

Excitingly, the UEFA Women’s Euro is being hosted by England this year. The tournament kicks off at Manchester United’s Old Trafford on Wednesday 6th July with England vs. Austria. The games are being held around England, from Milton Keynes to Brentford to Rotherham. But there are a few games being held in Manchester:

To view the full schedule and to enquire about tickets, visit the website. We'll be cheering you on, England's Lionesses!

After two years off, the intergalactic mezze of science, culture and art is back. BlueDot Festival takes place at the Jodrell Bank Observatory in Cheshire, offering 4 days of cosmic entertainment. In 2022, this includes a performance of orchestral arrangements from Björk, comedic performances from Desiree Burch, Adam Buxton and Lolly Adefope, a series of talks and panel discussions from leading scholars, and an immersive experience called The Luminarium.

The Manchester Pride Festival takes place across the August bank holiday weekend, bringing together LGBTQ+ people and their allies for celebration, protest, and liberation. While some of the festival – the Gay Village Party – is ticketed, the Parade, which takes place on Saturday 27th August, is free to attend, as is the Candlelit Vigil on Monday 29th. There’s also a free arts and culture programme called Superbia Weekend which celebrates LGBTQ+ life through poetry, art, music, dance, and more.

Where: Across the city

Bringing together a huge array of incredible food and drink traders, the Manchester Food and Drink Festival is going to be bigger and better than ever this year as the event celebrates its 25th anniversary. Festival events will take place in venues across the city – including in Cathedral Gardens, just across from CitySuites – so there is plenty to get involved in.

Do you like getting your funny bone tickled? If so, get your tickets booked for Laughterama, Manchester’s brand new comedy festival! From Wednesday 21st to Sunday 25th September, there will be five nights of brilliant comedy at Castlefield Bowl with some outstanding names, including Dylan Moran, Lou Sanders, Nish Kumar, Rose Matafeo, James Acaster, plus many more. The big names will be joined by some outstanding, up-and-coming acts, and there’ll be plenty of food and drink on offer too!

Love the sound of all this but need a place to stay? Check our availability and find your dates here!

We're proud to announce that CitySuites has won VisitEngland's ROSE Award for 2022. The ROSE Awards recognises accommodation providers in England that provide outstanding experiences for customers, irrespective of their star rating. CitySuites luxury aparthotel is one of 100 winners...

Key events in Manchester in 2022

We’ll be honest – there is never a bad time to visit Manchester. As one of the UK’s most exciting cities for food, music, sport, festivals, science, fashion, etc. , there is always something happening in Manchester. With rejuvenation and...

As working from home has become the ‘new normal’ we have been all been feeling a little restless. However, the lockdown period has given us the opportunity to explore our city like never before. From idyllic canal strolls to hidden...