So many of us Brits rely on trains to get from place to place. They provide us with a way to commute, travel to our holiday destinations, and much more. But what do we really know about train travel in the UK in 2020?

In this article we share all of the most up-to-date facts and figures about train travel in the UK, from the most popular train operators, most commonly used train lines and more.

When do we look for train times most?

One of the most important searches we make online before a train journey is looking up the train times. Figuring out what time your train is due and making sure you get there on time really does make all the difference.

Whether you’re on your way to the airport, a doctor's appointment or even a job interview, one thing we can control is getting to the station on time. But unfortunately, whether or not your train arrives on time is a totally different matter! In this section we reveal the latest train times statistics in 2020:

Searches for the term ‘train times’ made in the UK from Monday 12th October to Tuesday 13th October 2020.

Searches for the term ‘train times’ made in the UK from Wednesday 7th October to Sunday 11th October 2020.

We gathered this search data using the online tool Google Trends, which allowed us to analyse the average number of searches made for the term ‘train times’ within any given time period.

Which is the most popular train ticket retailer?

To discover which train ticket provider is the most popular in the UK, we analysed online searches for popular train ticket retailers using the tool Keyword Finder. The analysis revealed average monthly search volumes from the last year (2019/20), and found that:

Which are the busiest train stations in the UK?

To find out which train stations are used the most in the UK, we analysed the Office of Rail and Road (ORR)’s most recent data collection, which shows train station usage statistics from 2018 to 2019. The data revealed that:

Here’s a full list of the top 10 busiest train stations in the UK: 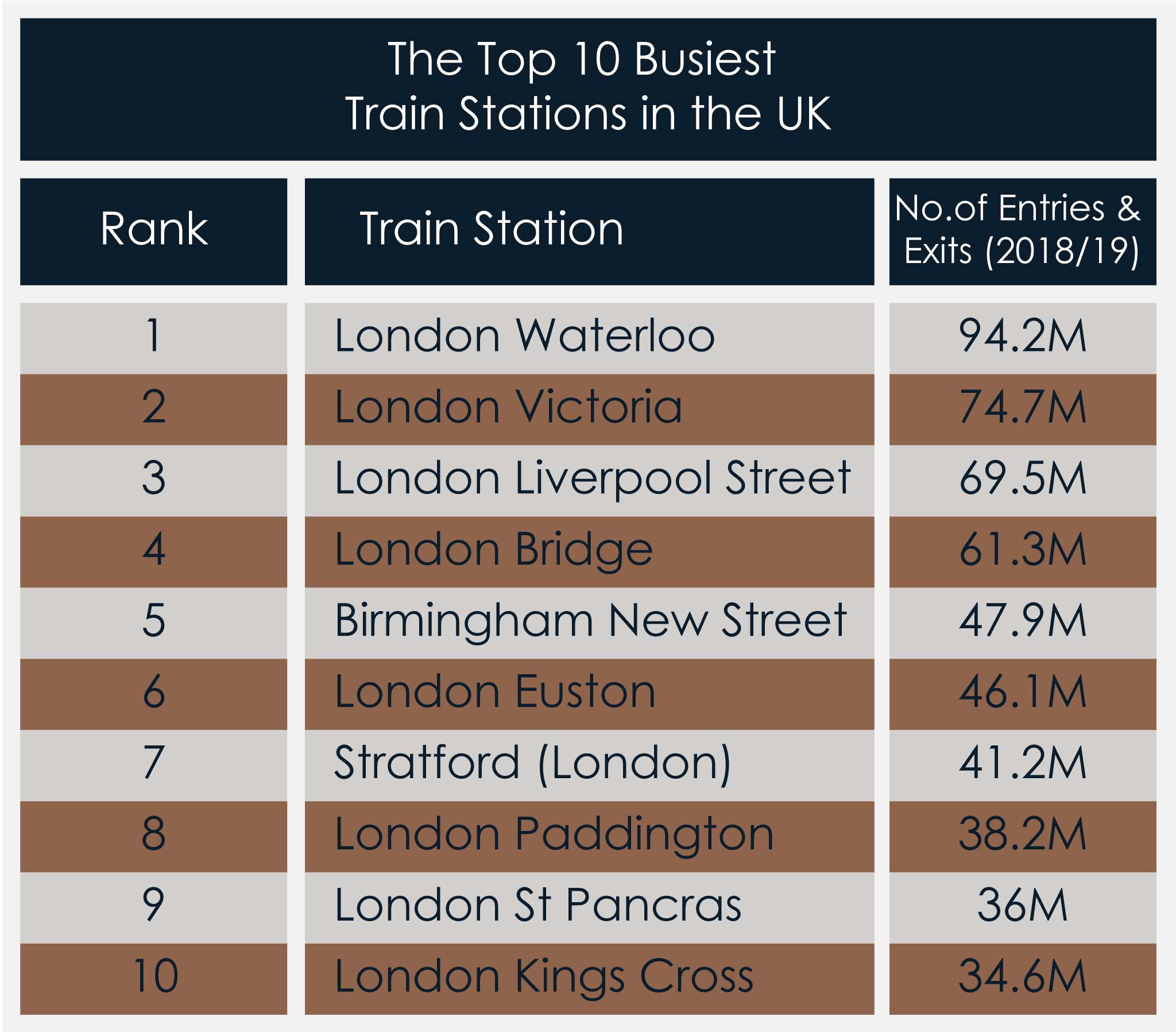 The top 10 busiest train stations in the UK

As you can see, a staggering 9 out of 10 of the country’s busiest train stations are located in London. This is no surprise given that London has the largest economy out of every city in the UK, so a large proportion of these travellers are bound to be commuters.

To find out more about the most recent train commute statistics, we gathered data from the Department for Transport’s most recent rail fact sheet. The data revealed that commuting is by far the most common purpose of travelling by train. This is followed by leisure, business and shopping.

The impact of Coronavirus on UK Train Travel

As you can imagine, the increase in working from home, new social distancing measures and self isolation rules have had a significant impact on the rail industry, particularly when it comes to commuters.

The ORR (Office of Rail and Road)’s recent rail usage report has found that in the first quarter of 2020, only 35 million passenger train journeys were made in Great Britain. That’s just 8% of the journeys that were made in the same quarter last year (439 million).

As you can see from the graph below, at the start of 2020 there were less passengers on trains than there have been for over 20 years. 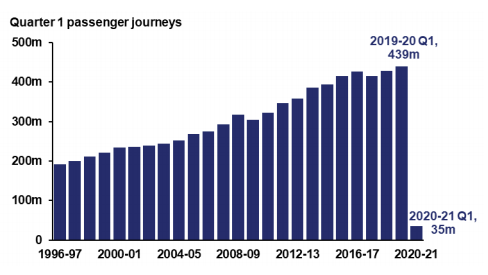 We hope this article has been useful in providing you with all of the most up-to-date train travel statistics.